Aspect #4 of the Christian Message

Contrary to popular belief, the Bible does not teach that we are going to spend eternity in heaven. Does that surprise you? It’s true, the Bible starts with man living on a beautiful earth and it ends the same way!

Of course, we know that the spirits of those Christians who die before Jesus returns will go to heaven. But heaven is not their final destination. Though the goal of many Christians today is simply to get to heaven, Jesus taught His disciples to get heaven here. He taught them to pray for the kingdom of God to come on earth as it is in heaven (see Matt 6:10). On the day that Jesus returns to earth to establish His kingdom, dead Christians will be raised to eternal life. Those Christians who are alive and remain on the earth at that time will be instantly changed, also putting on immortality. Christ and His people will rule the earth!

Many are asking the “when” question: “When will Jesus return and establish His kingdom on earth?” On one occasion, as Jesus approached Jerusalem, His disciples assumed He was going there to immediately establish His government and rule the world. However, their assumption was inaccurate. Jesus then told them a parable that was intended to help them understand His timing. He explained that He would go away for a while, and that they should occupy themselves with His business while He was gone. Then, after a time, He would return and establish His kingdom (see Luke 19:11–27).

After Jesus was crucified and raised from the dead, the disciples again thought the kingdom would appear immediately. They asked, “Lord, are you at this time going to restore the kingdom to Israel?” (Acts 1:6) But still, the time was not yet. Jesus instructed them to wait in Jerusalem to be filled with the Holy Spirit. Then, after receiving the power of the Spirit, they were to preach the good news of this coming kingdom to the ends of the earth (see Acts 1:8).

When will Jesus return? Consider what Jesus said in this Scripture verse:

And this gospel of the kingdom will be preached in the whole world as a testimony to all nations, and then the end will come. —Matthew 24:14

This verse seems to indicate that the good news of the coming kingdom, not simply the good news of eternal life, must be preached to all nations. In other words, Jesus has a purpose for us to fulfill—preparing the way of the kingdom.

The Purpose of the Ages

Spreading the good news of the coming kingdom has been met with much resistance over the centuries. In fact, much of history is an account of the problems faced by those seeking to accomplish this task. However, the work continues and the day is approaching when Jesus Himself will actually return and govern this planet. It will be a time of peace such as the world has never known. Many have longed for and sought peace in this world, but they have looked for it in all the wrong places. Their efforts have been futile because they did not know the Prince of Peace—Jesus Christ. But now, by following Jesus, the greatest leader the world has ever known, we can have peace internally. But more than finding peace within ourselves, we can help bring real peace to this world. 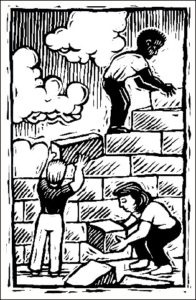 God wants to do His works through us! Though we cannot be saved or accomplish God’s purposes by our own works, God still saves us with a purpose in mind. The Bible says that we were created in Christ Jesus for good works (see Eph 2:10). By submitting to God, we can take part in His plan and help prepare the way for the kingdom to appear. Instead of being part of the world’s problems, we can be part of the answer!

The Bible also refers to us as stones, “living stones” that are being built into a spiritual house (see 1 Peter 2:5). Not only is Jesus saving people individually, but He is building them all together corporately into a spiritual building, a dwelling place for God (see Eph 2:22). This spiritual house is an assembly of people called the Body of Christ, and there is much work to do before it is completed. As we work with Jesus building His house, we are preparing the way for the day when He will return and establish His kingdom on earth. What a day that will be! What a purpose! What a cause to be part of!

In the next chapter, we will learn how to let Jesus guide us and join the cause.  Following Jesus is the greatest adventure that ever was!

Next: Who Is Driving?