The Holiness of God

Aspect #1 of the Christian Message

Holy can be defined as that which is sacred, set apart, perfectly pure, and untainted by evil. Holiness is a primary element of God’s nature. In part, it is how we define who He is; He is holy! God is absolutely pure and will always remain so. Here is an analogy to illustrate God’s purity and His commitment to remain pure.

Imagine a backyard swimming pool filled with crystal clear water surrounded by a rich green lawn. Growing on the lawn are beautiful fruit trees laden with plump juicy fruit. Several children are in the pool. Some are floating on rafts, some are laughing, splashing and playing.

In a few moments, Dad returns to the excited children still anticipating a big splash. Then something happens. As he is about to do a huge cannonball off the board, he suddenly stops.

“Jump, Dad! Jump in!” everyone shouts. But the shouts fade away until there is an uncomfortable silence.

The look of pure joy on the father’s face has been replaced by one of heartbreaking sadness as He gazes intently toward the other end of the pool. Sitting on the edge of the pool, with feet dangling in the water, is one of his sons holding a half-eaten piece of fruit. The sadness on the father’s face can now be heard in his voice as he speaks to the boy holding the dripping piece of fruit. “You know the rules.” Dad says firmly. “No food is allowed in the pool. I can’t swim with you now.” With that he rushes back into the house and locks the door behind him.

At this point you might be thinking, “Wow! That dad is a jerk! What’s the big deal, anyway? What harm can a few drops of fruit juice do when it is diluted in so much water?” Well, there is more to the story.

After rushing into the house, the father grabs the telephone and calls the health department. “We have an emergency on our hands,” he states. “My whole family has been infected with a dreadful bacteria! I need an emergency containment unit out here at once!”

Now we begin to understand. As it turns out, the fruit that the boy had been eating was from a tree infected with a rare and deadly bacteria. The fruit looks good and tastes delicious but carries an extremely contagious disease. Everyone in the pool had been exposed.

The emergency containment unit arrives on the scene in minutes and secures the area. Men wearing white coveralls, gloves, rubber boots and respirators quickly move the children from the pool area into a special quarantine vehicle. After the bus rumbles out of the drive, an official from the health department sits down to talk with the heartbroken father. “You did the right thing,” he said. “You acted quickly, exactly according to the rules.”

The Reason for Rules

“Goodbye, sir,” the nurse said in a businesslike tone. “We will keep you updated on the progress.

The nurse had just drawn a rather large sample of the father’s blood. The grieving father sat gazing out the window as the nurse walked past the now quiet pool and got into her car. The pool, which had been the center of family activity, was now eerily calm and quiet.

The father would be separated from his children during the coming months—maybe years. Meanwhile, a special antidote would be developed specifically for his infected children from the blood he had given. It had been critical for the father to remain pure and uncontaminated. Otherwise his blood could not have been used for developing the antidote.

The children would be kept alive with an antidote already developed from other kinds of blood. This antidote would work temporarily and be administered on a regular basis. But the permanent antidote had to be derived from the blood of the father. The father would be able to visit with his children, but only from behind a barrier of sealed glass. He would long for the day he could hold them in his arms again.

More than a Story

But, this story isn’t true. It’s just fiction—right? Yes, but the parallels are so very true! This is more than a story. It is an analogy that accurately illustrates why God has rules and why He must separate Himself from sin and those who are infected with it. God’s rules have a reason. He does not take such an strict position toward sin because He is egotistical, stubborn or selfish. He does so to save humanity from certain death and to prevent creation from completely breaking down. If there were no absolute standards for purity, no rules or laws by which creation must operate, we would all be without hope. Again, let me illustrate through an analogy. 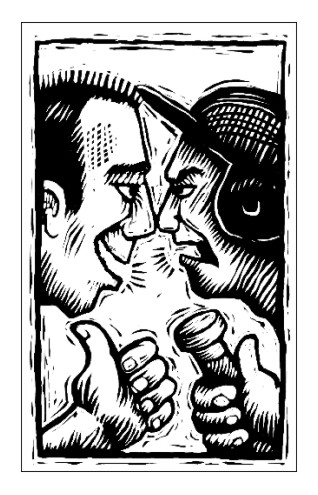 Imagine you are at game seven of the World Series. It is the bottom of the ninth, the score is tied and your team is at bat with two outs. The pitcher hurls a blazing fastball and the batter swings with all his might. “Strike three!” barks the umpire, “You’re out!” But wait a minute, the batter is protesting loudly. He is demanding another chance to hit the ball. The umpire takes off his mask, looks the batter in the eye, and says, “Sorry, pal, you’re out.”

No, everything is not okay. The rules can’t be changed!  How long could the game of baseball survive if the rules were changed every time someone was upset about being called out? Not very long! Soon the game would be in chaos and completely break down.

Yet people constantly try to change God’s rules to fit their immediate circumstances. This is called moral relativism. Relativism teaches that there is no absolute right or wrong; whatever you believe is right for you is right for you. Yet this lawlessness only causes society to break down and move toward chaos.

God is unchanging in His rules for all creation, because He knows that creation would have no future without His absolute standards. This is why God says, “I the LORD do not change So you, O descendants of Jacob, are not destroyed” (Mal 3:6).

God has even given us a rule book, the Holy Bible, to teach us His standards. His Word is His law and it will not change.

Next: Aspect #2: The Condition of Man